Eminem's Daughter Hailie Is Engaged — Who Is Her Fiance, Evan McClintock?

Evan McClintock is an enterprise growth executive who deploys "complex loss investigatory technology and services to enterprises and large government entities," per his LinkedIn biography. "My...
Read more

Erika Jayne didn't seem to be letting her ex-husband's court appearance ruin her day. In fact, she shared a selfie on her Instagram Stories...
Read more

The 2023 Grammys’ In Memoriam segment will go down in history thanks to Quavo! Per tradition, the annual award show honored late musical stars who...
Read more

Two young women who kidnapped their friend, stabbed her and threw her into the boot of her own car with a mission to dump her body at Belanglo State Forest were filming Snapchat videos and singing to music as she lay injured and trapped.

In a case that rocked a small town on Sydney’s outskirts, Nisha Phillips, 24, was found in the boot of her own Holden Commodore on the Hume Highway at Berrima on February 3, 2021, while pregnant teen Latia Henderson and Kayley Lee Ketley were arrested.

For more than 12 hours before a dramatic police intervention, Henderson, then 18, and Ketley, then 24, had tortured the victim. 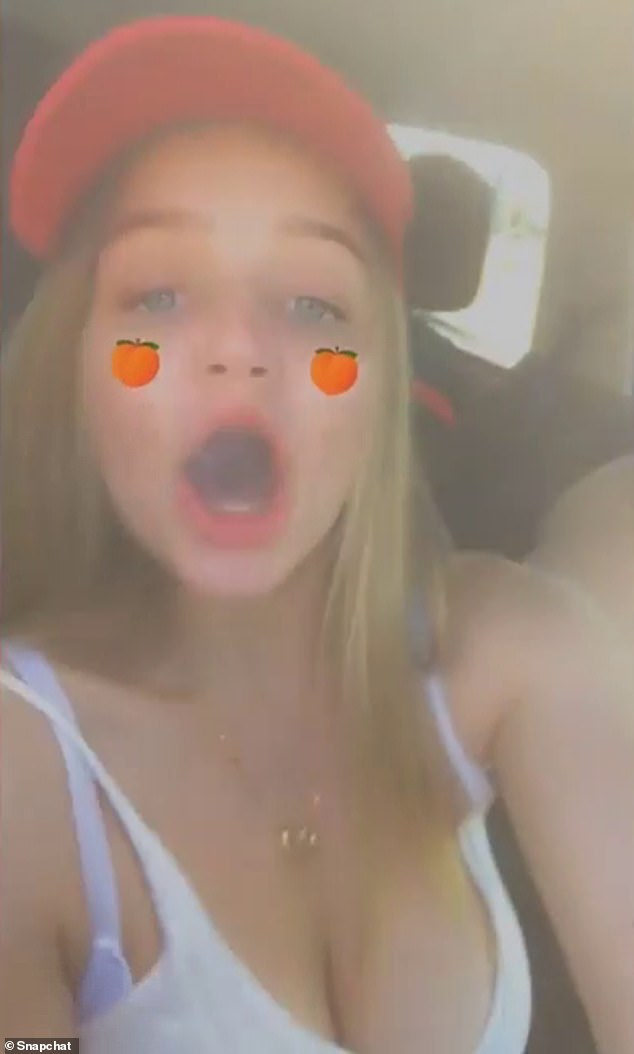 As Ms Phillips was using a makeshift tourniquet to stop herself from bleeding out in the back of the car, the two women were filming videos and singing along to a series of Chris Brown and Post Malone songs.

Videos taken by both women show Henderson driving the car south towards the Belanglo State Forest while the pair sing along to rap music.

In another snippet Henderson can be seen blowing smoke to the camera.

The pair also show the Hume Highway with their vehicle surrounded by trucks, complaining about the traffic. 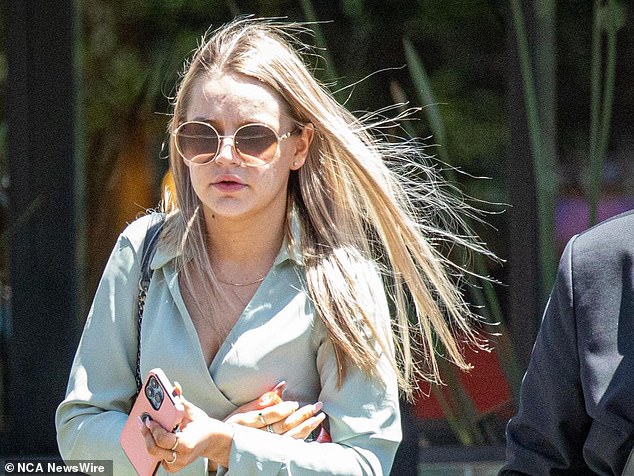 Latia Henderson, pictured at Campbelltown  Court, pleaded guilty to charges relating to the stabbing and torture of Nisha Phillips

The footage was shown to Campbelltown District Court on Thursday as the pair faced a sentence hearing.

Earlier this year both women pleaded guilty and NCA NewsWire revealed the details which led to the moment Ms Phillips was rescued.

They fronted Campbelltown District Court for sentence on Thursday – Ketley in her prison greens sitting in the dock, while Henderson wore a green dress and sat at the back of the courtroom.

For Henderson, it would be the last time she entered the court through the front door as she was taken into custody following the sentence hearing.

Henderson, who was released on Supreme Court bail just weeks before she gave birth to her son in August last year, pleaded guilty to a charge of take and drive conveyance and take/detain in company with the intent to commit serious indictable offence occasioning actual bodily harm.

The 20-year-old also pleaded guilty to a related charge of driving without a licence and had two further charges dismissed.

Meanwhile, Ketley, 26, who remains behind bars, pleaded guilty to two charges of take and drive conveyance without consent of the owner, kidnap in company with serious indictable occasion, reckless wounding and cause grievous bodily harm to person with intent. 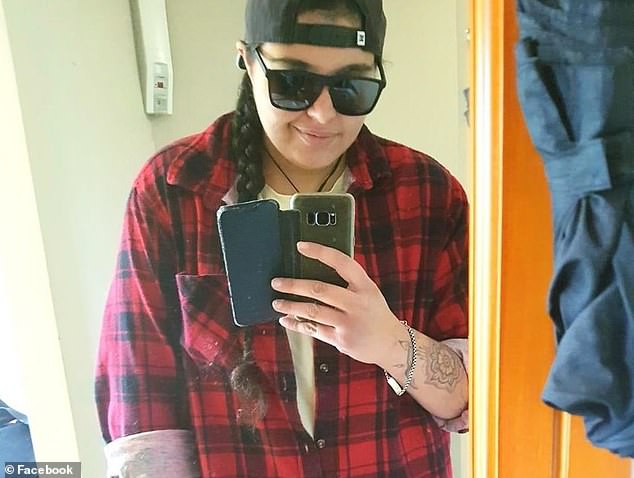 Nisha Phillips (pictured) was stabbed and forced into the boot of her Holden Commodore, where she fashioned a tourniquet to stop herself bleeding to death

Ketley pleaded guilty to a backup charge of possessing a prohibited drug and had six charges withdrawn.

During a sentence hearing on Thursday, Henderson tearfully told the court she was ‘absolutely disgusted in’ herself.

‘I’m extremely remorseful for the victim, she didn’t deserve that,’ she said.

She gave reasons behind her offending, including that she grew up in a ‘domestically violent home’, leading her to start using ice at the age of 16.

‘I used to just leave home and get drunk. I’d go into the city and I would just take my anger out on anybody,’ she said through tears.

Henderson told the court her stepfather, who was a bikie, used to physically abuse her mother as well as herself.

As a result, Henderson told the court she used to leave home and resorted to alcohol and drugs including ice and GBH. 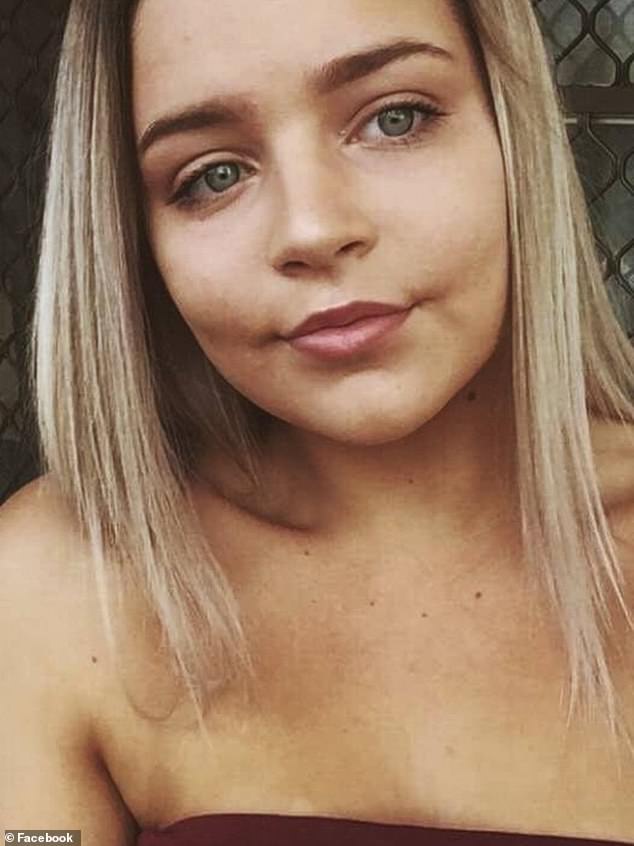 Henderson, now 20, was released on bail in August 2021 to give birth to her son

She conceded to still having an issue with drugs, telling the court that she used ice on Wednesday but wants to change her life around.

‘I want to be a better person and I want a good life for my son, I want to change,’ she said.

Crown prosecutor Joel Diggins questioned Henderson about her claim that she only went along with the offending because she was scared of Ketley.

He claimed the Snapchat video evidence which showed Ketley joking in the car was not normal behaviour of someone who was under duress.

The 20-year-old sobbed in court as she watched the Snapchat videos play.

Henderson’s grandmother Jacqueline Francisco told the court her granddaughter was a ‘lovely girl but has issues like most teenagers’. 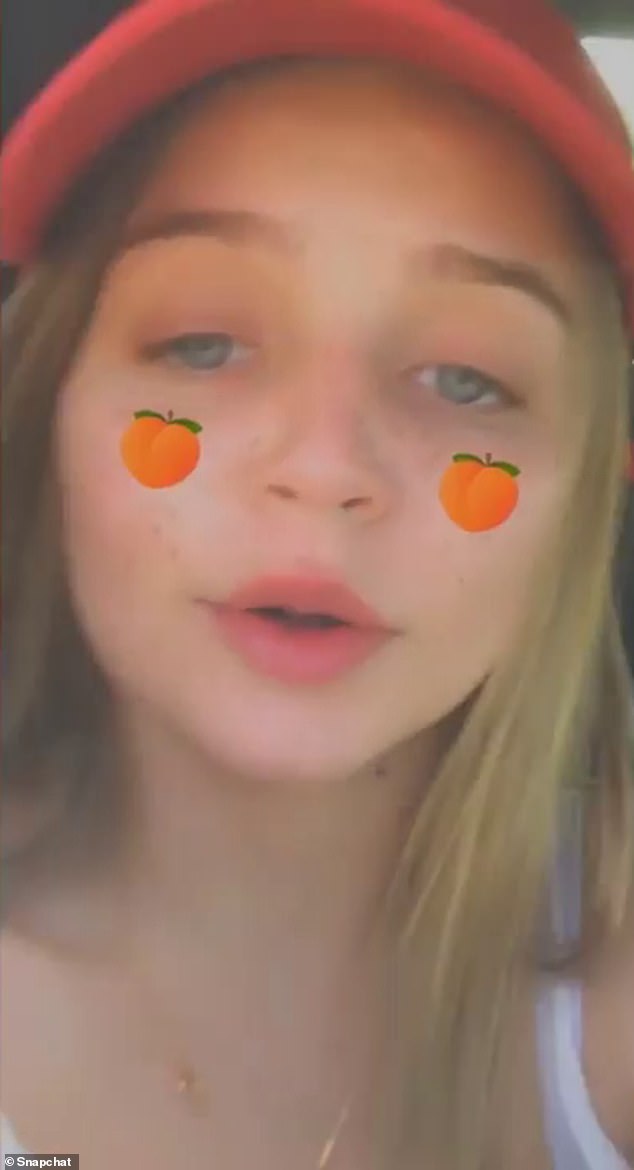 Ketley’s mother Sandra Anne Mulawa also took to the witness stand to tell the court her daughter was ‘a little disturbed’ while growing up.

Footage was played to the court showing Henderson and Ketley taking videos on Snapchat and singing as Ms Phillips was in the boot.

Ketley’s defence barrister Linda McSpedden told the court the 26-year-old had severe mental health issues that should be taken into account on sentence.

‘She was still very young at the time of offending and needs long-term mental-health care,’ she said.

Defence barrister for Henderson John Peluso said the court should take into account the remorse the young woman showed on Thursday.

‘Her attitude in court here, there is hope,’ he told the court. 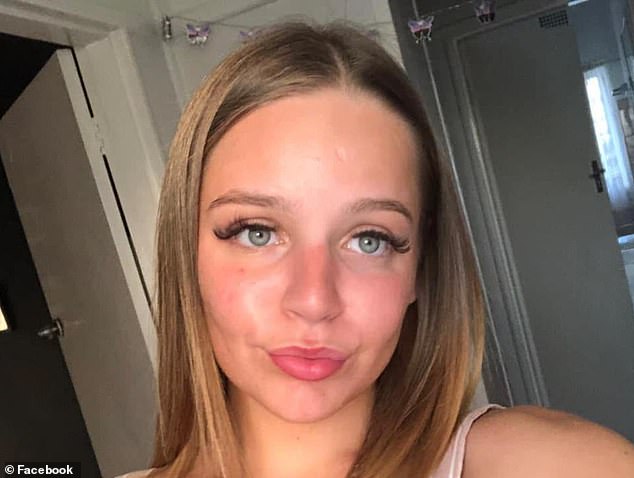 ‘Latia Henderson was living in a very difficult life situation by the time she was 18.’

Mr Diggins told the court both women deserved to be put in custody, as they both stabbed Ms Phillips.

He said the victim was forced into the boot about 7am and it wasn’t until the women were intercepted by police at noon that the offending came to an end.

Mr Diggins told the court it would give Her Honour ‘great concern’ that Henderson confessed to using drugs as recently as this week. 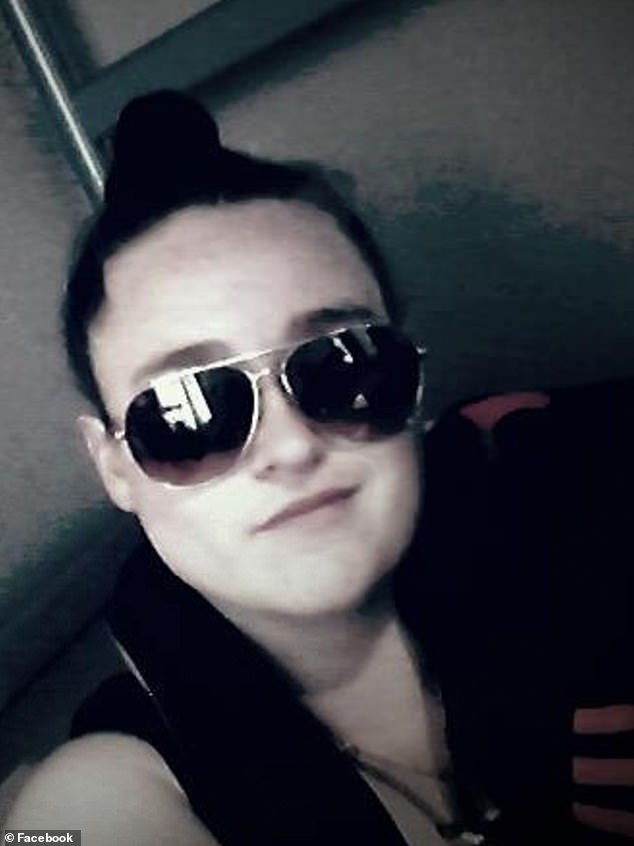 Henderson was taken into custody, blowing a kiss to her supporters before she was led into the dock by correctional officers.

Court documents revealed Henderson and Ketley were being driven around by Ms Phillips for most of the night on February 2 before planning to get high.

About 3.24am, the pair were in Ms Phillips’ car when she felt ‘tension’ and asked Ketley, ‘Do we have a problem?’

According to court documents, Ketley became enraged and the pair fought about going through a McDonald’s, while Ms Phillips said she wanted to get off the road as she was tired.

The trio arrived at a Glenfield house at 3.47am. Ms Phillips relaxed on the couch as the others disappeared upstairs.

Ketley returned holding a knife and stabbed Ms Phillips in the left knee and upper thigh, according to court documents.

Ms Phillips froze in fear but Ketley continued her threats: ‘I am going to make you squeal like a pig. I just need to let it all out. Last time this happened I got four and half years and this time it’s not going to happen like that.

‘Today I am going to kill you.’

Ms Phillips put pressure on her wounds and stayed silent while Ketley took her car keys and phone. Henderson and Ketley left for a while. 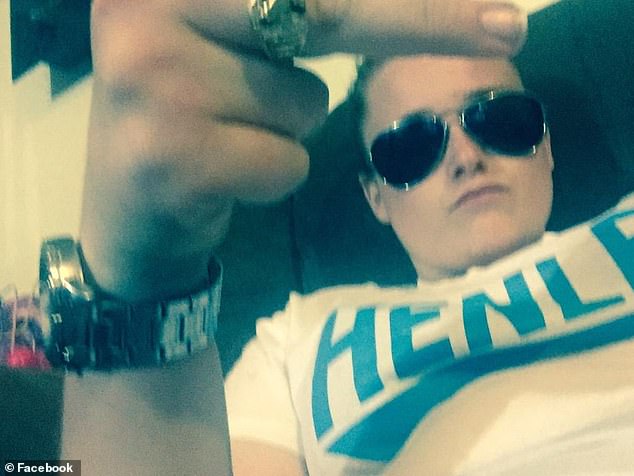 When they returned, Ketley said it was a ‘shame’ the victim was still alive.

‘I guess we are going to have to, like, drag this on now, hey, like I was hoping you would have just, you know, given up,’ Ketley said, according to court documents.

Ketley retrieved another 30cm-long kitchen knife and forced Ms Phillips out of the house and into the boot of her own Holden Commodore.

‘Don’t make a scene or I will kill you right here,’ Ketley threatened, holding the knife against Ms Phillips’ back.

Ms Phillips begged not to be hurt anymore. Ketley gritted her teeth and said ‘shut the f**k up and get in the f**king boot’,’ court documents state.

‘This is what happens to people that want to find out why you don’t f**k with me,’ Ketley said.

Ms Phillips lay terrified in the boot with a shoelace as a makeshift tourniquet to control the bleeding as Ketley drove around.

At one point, Ketley and Henderson stopped and opened the boot. Henderson took the knife and stabbed Ms Phillips on her arms before again driving away, according to court documents.

She participated in a recorded interview and said the disagreement in the car about music led to the attack. 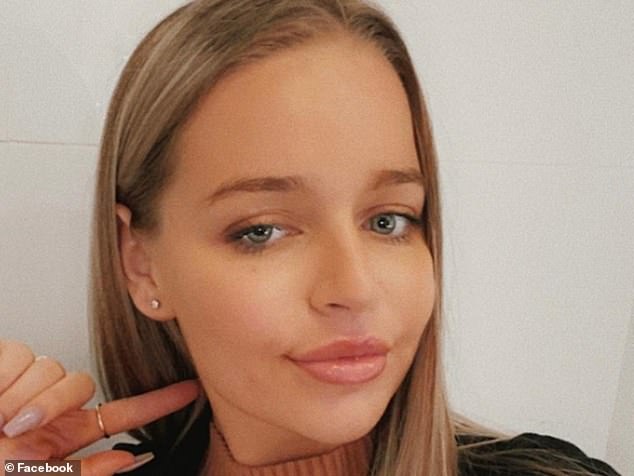 Ms Phillips confessed to smoking ice after she was stabbed because it helped with the pain, according to court documents.

Ketley denied stabbing Ms Phillips and said she had no idea she was in the car but was told by another woman to pick up the Commodore at an Ambarvale carpark and drive it back to a hire location in Colo Vale.

Henderson made partial admissions to the offences, saying she knew Ms Phillips was in the car but did not know when she was stabbed. 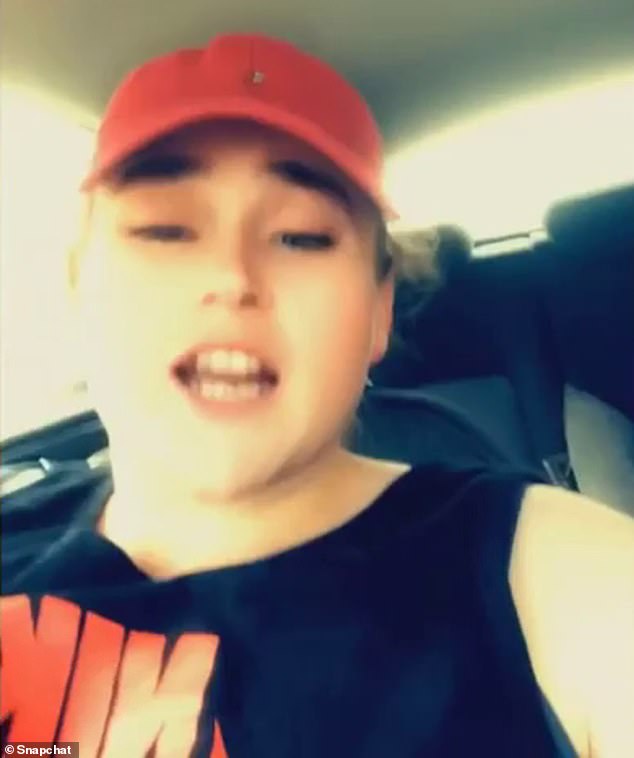 She told police she wiped blood off the back of the car with a tea towel, saying it was an ‘iffy’ situation.

Henderson also confessed to police she was 12-weeks pregnant but took Xanax and ice at one of the houses, according to police documents.

Henderson drove south on the Hume Highway, with her phone searching for directions to Belanglo State Forest. 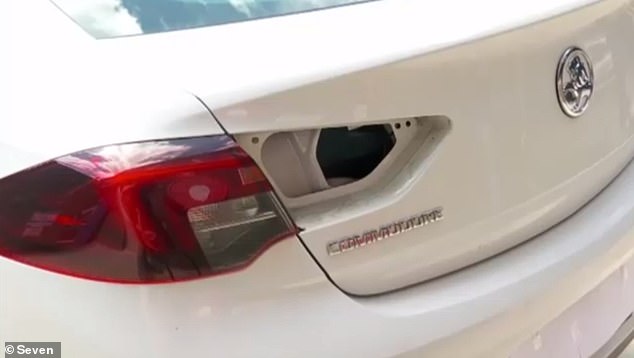 Despite passing out a few times, Ms Phillips removed the left tail light and put her hand out of the hole, waving at cars to indicate she was in the boot.

About 11.30am, motorists on the Hume Highway noticed the car was erratic and called police.

A police officer driving an unmarked police car saw the hand and stopped the car near Berrima, about 6km from the Belanglo turn-off.

When questioned about who was in the boot, Henderson pretended she didn’t know anyone else was in the car.

Special Constable Brendan Quinn walked to the back of the car, leant towards the tail light and said ‘what’s your name love?’ before he folded down the rear seats and found the victim.

They were pressed again, with Henderson replying ‘I don’t know’ and Ketley saying ‘what the f**k bro’.

Ms Phillips told the police through tears that she was taken hostage.

VANESSA Feltz's ex-boyfriend Ben Ofoedu has been branded "disrespectful" by her fans after seemingly brushing off their vid with...
People

I lost half a stone by only eating pizza every day