Mayor Adams on Morning Joe: it's not fair!

We all assumed that the Chinese Spy Balloon was, in fact, a spy balloon. But what if it weren’t? What could it have been, or...
Read more

Hellmann's 2023 Super Bowl advertisement begins with Jon Hamm and Brie Larson as miniature versions of themselves in a fridge. After the "Mad Men"...
Read more
Celebrity Lifestyle

SCHOOL of Rock became an instant classic when it was released 20 years ago. The hit comedy is still rocking on with new audiences today...
Read more

The strategy of border state governors to force the Biden Administration to secure the border is beginning to work.

The intent behind shipping illegal immigrants to Blue cities such as New York and Chicago was obvious: Democrats wouldn’t support closing the border until they started to pay the price. Virtue signaling is one thing, paying the price is an entirely different matter.

A bit over a year ago Mayor Adams was virtue signaling like mad, attacking Governors Ducey, DeSantis, and Abbott for busing and flying illegal immigrants from their own states to places like New York. His attacks were pointed, challenging the ethics of Republicans who weren’t sufficiently welcoming to illegal immigrants. 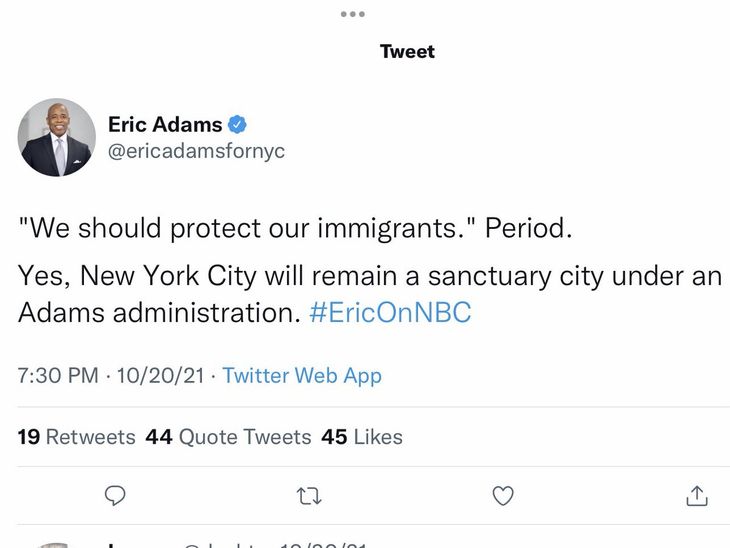 Adams was clearly the good guy, and he extended sanctuary to the immigrants, protecting them from the predation of evil Republicans. Democrats know how to welcome people, Republicans not so much.

Times have changed. His city has suddenly become a border city, despite having to bear only a tiny fraction of the flow compared to states like Texas and Arizona.

Suddenly there is no room at the inn. As even states run by liberals are sending their illegal population to so-called “sanctuary cities,” the sanctuary status is evaporating. It turns out that making empty promises while forcing others to bear the burden of one’s moral posturing is easy. But actually doing the “right thing” is really hard.

Even Katie Hobbs, newly elected Leftist governor of Arizona, has decided not just to keep Governor Ducey’s program of busing immigrants out of the state, but to expand it to include flights. Again, virtue signaling is one thing, but “doing the work,” as liberals like to say, is quite another.

It turns out that all that talk about a border crisis was right, even though it was Republicans saying it. Who could have guessed?

Well, it didn’t take any guessing. The evidence was always there–it didn’t matter to the Democrats because it was Red states bearing the burden, and that is just fine with them. Now, not so much. Even when complaining about the situation he still insists that this is only a problem in “several cities in the country,” as if the 5+ million illegal immigrants that President Biden invited in have all shown up at his door.

In yet another whine-fest, Adams went on Morning Joe today to complain about his problems again and dropped something particularly interesting–probably without even noticing that he did. Joe and Mika clearly didn’t, because real journalists would have pressed Adams with a follow-up right away.

.@NYCMayor on the city closing its doors to immigrants: “Look at Chicago, Houston, Washington, New York City, this is just unfair for cities to carry the weight” of integrating migrants. pic.twitter.com/MLobK2Tqfz

Did you catch what he said that was so damning? Adams not only complained bitterly about how sanctuary city New York shouldn’t have to actually be a sanctuary but dropped this tidbit: nobody knows who to talk to at the White House to coordinate responses to the problem.

Hmmm. Don’t we all know who is supposed to be doing the coordinating? From the beginning of the Biden Administration, we were told it is Vice President, Kamala Harris.

Apparently not. She isn’t answering the phone calls apparently, being too busy being incoherent on the campaign trail. Talking about Venn Diagrams, yellow school buses, and other important issues.

This shows how seriously the Biden Administration takes this problem. Not only was assigning this problem to Kamala proof that they couldn’t care a whit–she couldn’t coordinate a 3-person parade–but she isn’t even pretending to care when prominent Democrats like Mayor Adams seek help.

Mayor Adams complained that the crisis is like a house burning down, which certainly seems to be a different tune than what Secretary Mayorkas and Karine Jean-Pierre keep telling us. They insist that the “border is secure.” And until illegals started showing up in New York and Chicago so did Mayor Adams.

It’s all good, as long as only Republicans pay the price.

POSTSCRIPT: Mayor Adams suggests that business owners hire private security companies to deal with criminals because apparently, the city is too incompetent to police the city.

Democrat New York City Mayor Eric Adams says “it is a wise strategy” for shop owners to hire private security guards — at their own expense — because “people must feel safe.” pic.twitter.com/zDadY4H9Al

LEONA Lewis has shared a first photo of her daughter Carmel Allegra six months after giving birth. The 37-year-old...

Tom Brady Teases The Start Of His Sports Broadcasting Career

“My wife should take care of my kids; I’m not coming back to Nigeria” – Osinachi Dike declares as he becomes US citizen (Video)