Everything you need to know about WorldPride Sydney 2023

Without actually making mention of Ben Affleck's clearly unhappy demeanor, Jennifer Lopez paid tribute to her husband in a sweet Instagram post after the...
Read more

Tom Brady Teases The Start Of His Sports Broadcasting Career

It was reported that Tom Brady signed a blockbuster 10-year broadcasting deal with Fox Sports worth $375 million, per CNN, with rumors suggesting he could start...
Read more

A Victorian man who set a deadly fire on Black Saturday could soon walk free from jail.﻿Brendan Sokaluk lit a fire at Churchill, south...
Read more

Pussycat Dolls alumni and international pop sensation Nicole Scherzinger has been announced as the latest international star set to jet into Sydney for next year’s WorldPride festival.

Scherzinger﻿ will join the likes of Kelly Rowland, Kylie Minogue, Charli XCX and Jessica Mauboy, who are due to perform at various stages throughout the mega-event.

WorldPride 2023 is tipped to be the biggest event in Sydney since the 2000 Olympic Games, injecting up to $600 million into the local economy as 500,000 international travellers ﻿head Down Under for the 17-day celebration.

The event will have opening and closing ceremonies, along with parades, festivals, theatre, art and a human rights conference aiming to support and amplify the voices of marginalised people within the community.

“The first WorldPride in the Southern Hemisphere is a significant moment for both for the LGBTQIA+ community in Australia and Sydney. Now is the time to get ready for the global LGBTQIA+ reunion we’ve all been waiting for,” Sydney WorldPride’s Chief Executive, Kate Wickett said.

Here’s a rundown of everything we know so far.

WorldPride is a global festival held every two to three years that celebrates inclusivity, diversity and acceptance within the LGBTQIA+ community.﻿

The first event was held in Rome in 2000﻿ and has since been organised to coincide with historic events in the community’s rich history, including the anniversary of the Stonewall Riots.

Cities need to compete to host, with ﻿Sydney successfully winning the bid in 2019 – beating out Houston in Texas and Montreal in Canada.

Sydney will be the first city in the southern hemisphere to host and this year’s celebration lines up with the 45th anniversary of the first Mardi Gras Parade in Australia.

For 17 days, Sydney’s inner-city will transform into ﻿a Pride hub, with a number of streets set to shutdown to make way for “Pride villages”.

The NSW Government estimate the event will funnel $600 million into the local economy.

Revellers will be able to enjoy a plethora of offerings for Sydney WorldPride.

From marches to festivals, human rights conferences and ceremonies, here are some of the key dates to remember – and in some cases book tickets for.

The iconic Mardi Gras Fair Day will be held at Victoria Park in Chippendale in the city’s inner-city.

Fair Day is one of the most well-loved events in the Mardi Gras calendar, where punters can enjoy live music, dance floors as well as plenty of food and drinks.

The bash will be held ﻿Ivy Pool Club, where ticketholders will get the chance to dance the night away to some of the country’s biggest musical acts.

﻿The line-up is yet to drop, but think DJs, cocktails and speedos.

Held at The Domain in the heart of Sydney’s CBD, the WorldPride official opener will be headlined by none other than Australia’s pop princess: Kylie Minogue.

Casey Donovan and drag superstar Courtney Act will host the event, which will be broadcast live.

The Mardi Gras parade will return to Oxford Street after the pandemic forced the event into the Sydney Cricket Ground for two years.

Labelled the “biggest event” in the WorldPride calendar, glittery spectators will watch on as 12,500 people and over 200 floats make their way along a path forged by civil rights activists in the late 70s.

The party so popular, it’s already sold out.

﻿The Afterparty is held in Moore Park’s Horden Pavilion and in recent years has been headlined by international superstars Sam Smith and Dua Lipa.

It’s not known which big name will take the stage yet this year. ﻿

﻿There’ll be no time for a hangover the day after the Mardi Gras parade with US Grammy winner Kelly Rowland to descend on the Domain alongside DJ Dan Slater for a seven hour dance-off with 10,000 revelers.

“From dancers onstage, to surprise acts around you, this will be a gay ol’ feast for the eyes and ears,” event organisers said.

More than 60 local and international speakers will take the stage at Darling Harbour’s International Convention and Exhibition Centre over three days.

First Nations leaders and elders, along with lawmakers, academics and LGBTQIA+ activists will discuss how to make positive changes for equality and justice.

United Nations Independent Expert on Sexual Orientation and Gender Identity ﻿Victor Madrigal-Borloz has been confirmed as a special keynote speaker.

The program will focus on:

Tickets start at $747﻿ and you can find out more information here.

Dubbed ﻿an “uniquely Australian experience”, this huge bash will be headlined by US superstar Nicole Scherzinger and will bring together 12,000 people for a seven hour-long party on the shoreline of Australia’s most famous beach.

“Nicole Scherzinger’s performances are always electric and she is sure to raise the temperature at this sizzling beach party.

“Bondi Beach Party will be a uniquely Australian experience, so I’m particularly pleased Sydney WorldPride will be showcasing an all-Australian DJ line-up, sharing the sound of Australia’s club scene with the world.”

Some 50,000 people are to set march across the Sydney Harbour Bridge in their loudest and brightest attire, making a ﻿powerful statement about LGBTQIA+ visibility and awareness.

Where will Sydney WorldPride events be held?

The location of individual events will vary over the 17 days, however they will primarily be in Sydney’s inner city. ﻿

A number of streets will be closed to traffic between February 24 and March 5.

“The area will become home to daily stalls, performances, dining and a place to connect with friends and family in between WorldPride events.

“Crown Street will be home to a stage with nightly shows and special extended entertainment on weekends.

“To mark the final weekend of WorldPride, Oxford Street will also be closed for once-in-a-lifetime street party, all the way from College Street to Flinders Street.”

Who is performing at Sydney WorldPride?

Kelly Rowland will headline alongside Kylie Minogue, Nicole Scherzinger, Jessica Mauboy and Charli XCX, but dozens of other local and international acts are also set to perform at ﻿various events across the 17 days. 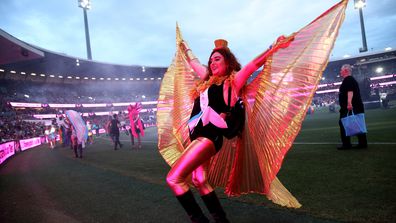 The 2023 Grammys’ In Memoriam segment will go down in history thanks to Quavo! Per tradition, the annual award show...
Sport

Who are Steve Irwin’s children Bindi and Robert?