Prostate cancer symptoms: Worrying sign in your eyes which should not be ignored Heart attacks in humans are the price...
Read more
Bio

Who is Isaac Argro? Azsia Johnson’s ‘abusive’ ex-partner arrested for allegedly ‘executing’ her

Tamil asylum-seeker family set to return to Biloela thanks to Labor win after they were detained on Christmas Island for three years: ‘Many happy tears were shed’

A Tamil asylum-seeker family have broken down in tears as they rejoice the incoming Labor government who promised they will be able to go home to Queensland.

Priya and Nadesalingam Murugappan and their two Australian-born daughters, Kopika and Tharnicaa, have been fighting to return to their home in Biloela after spending three years in detention on Christmas Island.

The family, of which the three eldest members have been granted bridging visas, have been living in Perth awaiting their fate since Tharnicca had to be medically evacuated from the island in June.

A statement from Angela Fredericks, of the Home To Bilo campaign, said the family were overjoyed by the election result due to what it means for them.

‘Mr Albanese has promised to allow our friends Priya, Nades and their girls Kopi and Tharni to return home to Biloela,’ she said.

‘We just called Priya in Perth and told her she and her family were coming home. 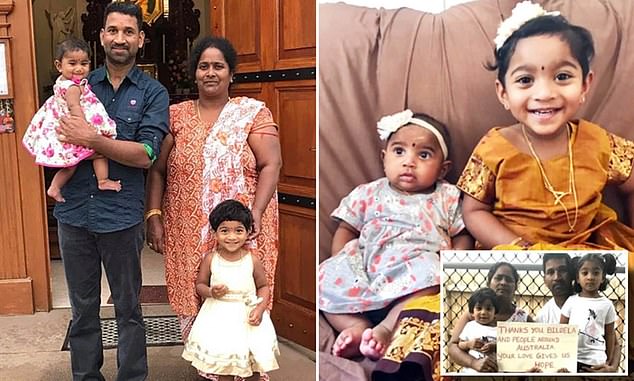 Tonight these children are safe for the first time since 2018.
Priya and the girls heard the news that they can return home to Queensland from the unstoppable @HometoBilo team.

Nades was at work until just after 9pm, he arrived home as Morrison was making his concession speech. pic.twitter.com/tP2b4pJ3b8

‘Many happy tears were shed.’

‘This family has been taken away from their home for more than four years,’ she said.

‘They never should have been taken from the town that loved and needed them.

‘As they make the long journey to Biloela to resume their lives here they also commence a journey of recovery and healing.’

Priya and Nadesalingam, who goes by the nickname Nades, came to Australia separately by boat more than a decade ago to escape the civil war in Sri Lanka.

They were granted bridging visas and settled in Biloela, in Central Queensland, where their daughters were later born.

However, their lives were upheaved in August 2019 when their bridging visas expired and the family were sent to Christmas Island, where they became the sole residents.

The move sparked widespread outrage as their community and supporters across Australia rallied to have the family brought home.

Last year, the family were brought back to mainland after Tharnicaa suffered a life-threatening blood infection and was taken to Perth for hospital treatment.

She was accompanied by her mother before her father and sister were later flown into Western Australia so the family could be reunited. 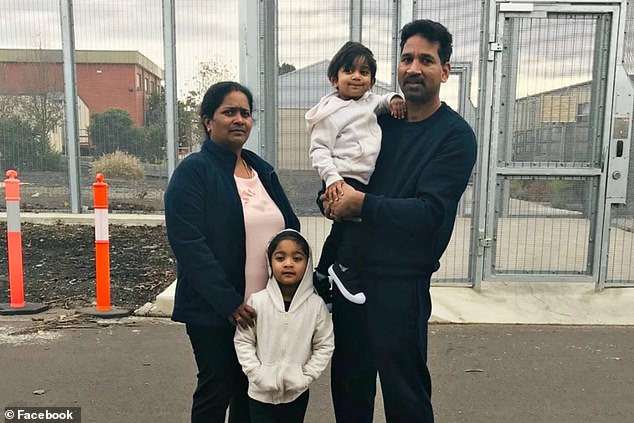 The family have since been living in limbo as to whether or not they would be forced to return to Sri Lanka in September, when the three bridging visas are due to expire.

NZ-based journalist Rebekah Holt tweeted a photo of Priya and the two girls wearing red, Labor’s campaign colour, as they received the news from the Home Bilo via a video call that they would be able to return to Queensland.

A video posted in the comments showed the two relieved parents embracing as Nades received the news Scott Morrison had conceded as he arrived back at their Perth community detention facility at 9pm from work.

‘Hundreds of thousands of Australians have opened their hearts to this family,’ she said.

‘We know Priya is incredibly grateful to all of them.’