Kernel CEO Bryan Johnson Illness And Health Update: What Was His Mission To Reverse Aging

A look at “Kernel CEO Bryan Johnson Illness And Health Update” In his quest to restore his youth and achieve a body...
Read more
People

On the latest episode of Rap Radar, Jersey City rapper Ransom sits down with Brian “B.Dot” Miller and Elliott Wilson to talk about...
Read more

The Jets are in the market for a quarterback … again. This is the second in a three-part series exploring their options this offseason....
Read more

Frightening video footage reveals the moment a robber breaks into a woman’s car to steal bags of cash after following her for several miles from a nearby Wells Fargo Bank in Texas where she had made a withdrawal.

Authorities in central Texas have released the clip to raise awareness of a lucrative crime known as ‘bank jugging’ – where thieves mark out their victims at ATMs or retail stores before stalking their car and waiting for them to leave it unattended.

It comes as figures obtained by local site Axios reveal that incidents of jugging in Austin, Texas, have more than tripled in a year. 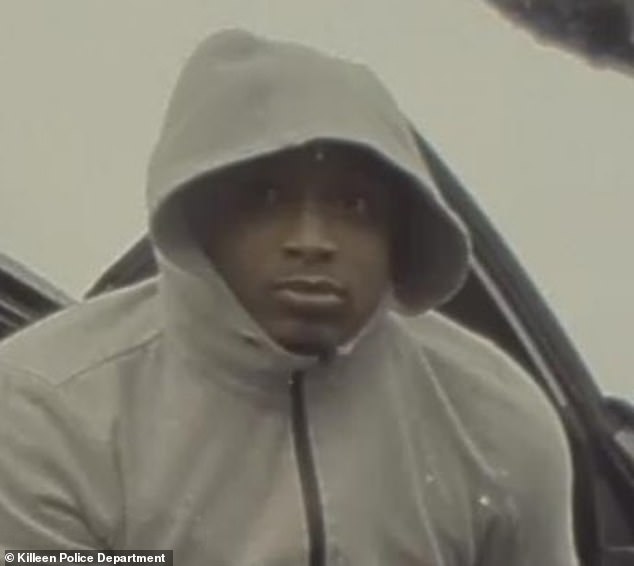 A criminal in a grey hooded top, pictured, is seen creeping out of his Toyota before smashing through the windows of the victim’s car after she had stopped off at a Goodwill store

The clip begins with a man in a grey hooded top and jeans creeping out of a black Toyota vehicle and approaching the victim’s car parked next to him.

He quickly punches through the glass window – seemingly with just his hands – and retrieves two bags, throwing them back into his own car.

The crime, which happened in November, is over within five seconds.

Reports of bank jugging have steadily been on the rise across America for years.

Some incidents can be extremely violent with criminals attacking their victim rather than waiting for them to vacate the car.

Horrifying footage released in 2018 shows one man being beaten to the ground by thugs who followed him home in Houston.

Crooks typically watch for customers who have just visited ATMs or are leaving high-end stores, and often target elderly victims. 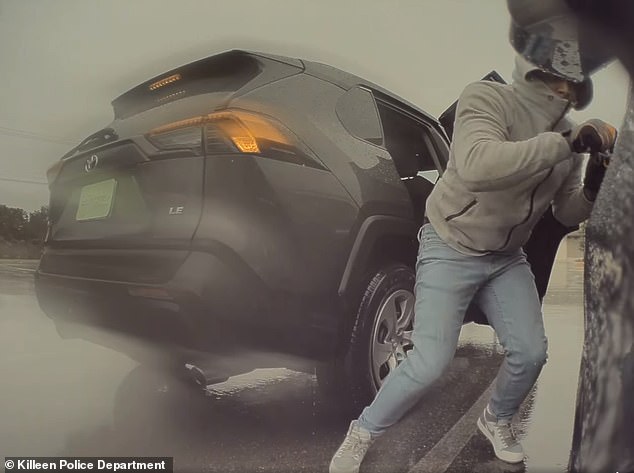 Footage shows the crime, which happened in November, is over within five seconds 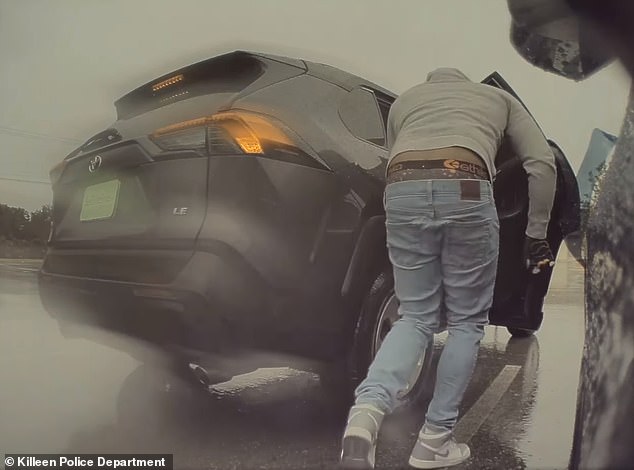 And in New York City, banks have warned this week they are struggling to cope with a wave of ‘crime and vacancy’ running rampant around their branches and ATMs.

Chase Bank announced it was closing some of its ATMs early at 5pm, while other banks have hired security guards at their city center branches. 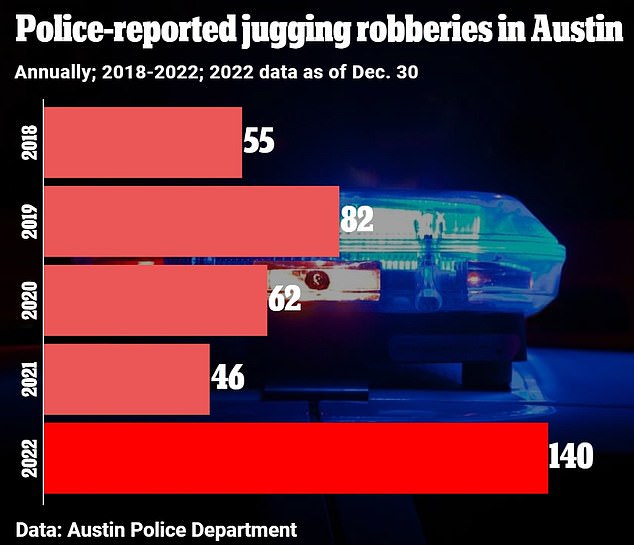 Incidents of bank jugging have been on the rise for the last five years in Austin, Texas

The latest video was released by the Round Rock Police Department which said the victim had just made a cash withdrawal at the local Wells Fargo Bank.

On her way home, she stopped at a Goodwill store which is when the robber made his move.

Why is it called bank jugging?

‘She then stopped at the Goodwill located at 17151 Smyers Lane in Round Rock. While the victim was inside Goodwill, her window was smashed in and her property was stolen.

‘Surveillance footage captured a Toyota Rav4 following the victim into the parking lot.’

The criminal’s vehicle did not have a license place but rather a placard with the words ‘SeeDriveSmile.com’.

The post was also shared by nearby Killeen Police Department, which said the same vehicle may have been involved in a similar incident in their county in December 2022.

Cops said the victim had withdrawn a ‘large sum of money’ from a local bank before driving to a restaurant, where the suspect broke the window of their truck and stole the cash.

Detectives added that they had received information that the same suspect vehicle was involved in two other burglaries in McClennan County.

When questioned about the rise in jugging incidents, Bellmead Police Department Lieutenant Andrew McGee told KWTX: ‘It can really happen in a matter of minutes.’

Sergeant Casey Sheppard, of the Temple Police Department, added: ‘We’ve had at least one case where an individual went into a gas station. Within the amount of time it took them to fill up their car and go inside the gas station, the money was taken.’

Anonymous tips can be submitted at WilcoCrimeTips.org

Inside Tiki Barber's Clash With Stephen A. Smith

Jessie Lemonier Parents Francoise and Henry Lemonier Mourns The Death Of Their Son, Siblings And Family

Where Is Kamene Goro Going After Leaving Kiss FM: Was She Fired Or Resigned? Net Worth

5 Ex-Memphis Cops Charged With Murder in Death of Motorist; Video to Be Released Friday

SEE IT: Alex Murdaugh Cries as 911 Call From Crime Scene Is Played in Court

PICTURED: Who’s Who in the Alex Murdaugh Murder Trial