Trevor Noah declared it, and the world agrees, Beyoncé is the G.O.A.T. After accepting the 2023 Grammy award for best dance/electronic music album for...
Read more
People

Is Cottrell Guidry hitched? No, he isn’t. Having ‘unmarried’ as his conjugal status, it is pointless to discuss Guidry spouse. Beforehand, he was in...
Read more
People

Yale University honored the 9-year-old girl who had the police called on her by a White man last October with a special ceremony....
Read more

What is Sandra Day O’Connor’s Net Worth and Salary?

Sandra Day O’Connor is a retired attorney and politician who has a net worth of $8 million. Sandra Day O’Connor is best known for being the first female associate justice of the US Supreme Court from 1981 to 2006. Before this, she served as a judge and the Republican leader of the Arizona Senate. Most often siding with the Court’s conservative bloc, O’Connor wrote majority opinions in such milestone cases as Hamdi v. Rumsfeld and Grutter v. Bollinger.

According to the last financial disclosure released by Sandra during her time as a Supreme Court justice, her net worth in 2004 ranged between $3 million and $6.5 million.

Sandra Day O’Connor was born on March 26, 1930 in El Paso, Texas to Ada Mae and rancher Harry. She was raised on a 198,000-acre cattle ranch close to Duncan, Arizona, and grew up hunting coyotes and jackrabbits. O’Connor had a younger sister named Ann, who served in the Arizona Legislature, and a younger brother named Alan. For her early education, she lived in El Paso with her grandmother and went to the Radford School for Girls; she eventually graduated from Austin High School in 1946. Subsequently, O’Connor attended Stanford University, from which she graduated magna cum laude in 1950 with her bachelor’s degree in economics. She went on to obtain her law degree from Stanford Law School in 1952.

After graduating from law school, O’Connor married and became a deputy county attorney in San Mateo, California. When her husband was later drafted, she left with him to work in Germany as a civilian lawyer for the Army’s Quartermaster Corps. Following three years there, they returned to the United States and settled in Maricopa County, Arizona. There, O’Connor volunteered in a number of political organizations, and worked on the presidential campaign of Arizona Senator Barry Goldwater. From 1965 to 1969, she served as assistant Attorney General of Arizona; subsequently, she was appointed to fill a vacancy in the state’s Senate. O’Connor ended up winning the election for that seat in 1972, becoming in the process the first woman to serve as a state’s majority leader in the Senate. In 1974, she was appointed to the Maricopa County Superior Court, where she served from 1975 to 1979. O’Connor was then promoted to the Arizona State Court of Appeals.

During his presidential campaign in 1980, Ronald Reagan vowed that he would appoint the first woman ever to the US Supreme Court. He followed through on his pledge in the summer of 1981, when he nominated O’Connor. In September, O’Connor was confirmed by the Senate with a 99-0 vote, the most votes in the history of US Supreme Court confirmations. On the Court, she mostly joined the conservative voting bloc of Antonin Scalia, Anthony Kennedy, and William Rehnquist; however, she was also often the swing vote. O’Connor was part of the majority in such major cases as Grutter v. Bollinger; Lockyer v. Andrade; United States v. Lopez; and, famously, Bush v. Gore, in which she facilitated the end of Gore’s presidential hopes.

In numerous of her court decisions, O’Connor was unpredictable when it came to First Amendment Establishment Clause issues. She was more consistent in her upholding of the Fourth Amendment. When it came to abortion, O’Connor generally deviated from the dominant conservative ideology in her support of a woman’s right to choose. Overall, on the Court, O’Connor was known for her case-by-case approach to issues, a tack some saw as reasonable while others found it lacking in a coherent judicial philosophy. 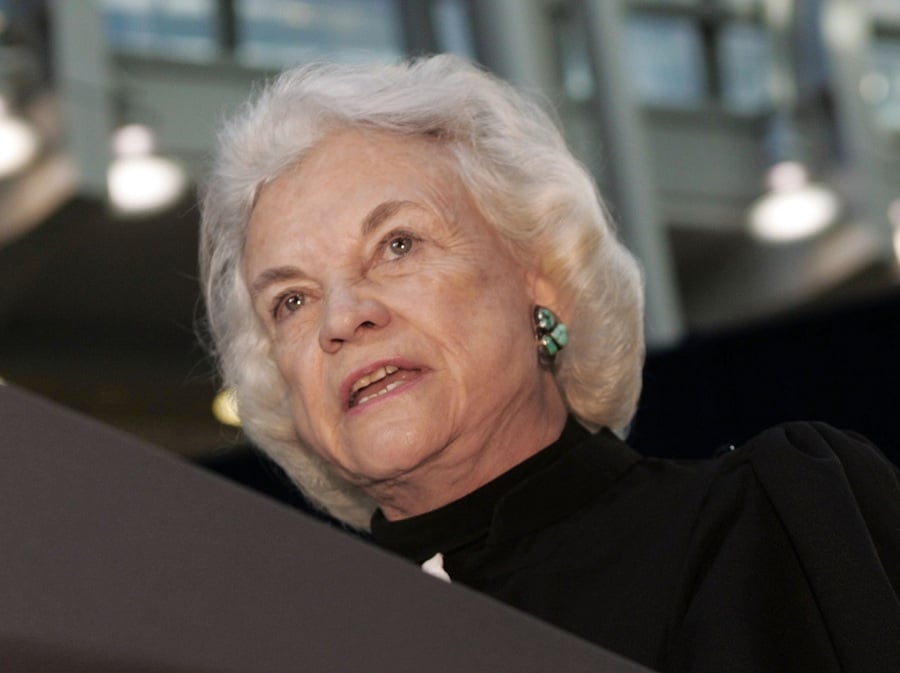 O’Connor announced her retirement from the Supreme Court in the summer of 2005. This was complicated, however, by the passing of Justice Rehnquist later in the year, creating a new vacancy on the Court. In response, O’Connor stayed on the Court until her replacement could be confirmed. She was ultimately succeeded by Samual Alito in early 2006.

Following her retirement, O’Connor continued to hear cases in federal district courts and courts of appeals. She also spoke at a number of venues, including Georgetown University, the Elon University School of Law, and the William & Mary School of Law. In the spring of 2006, she began teaching an annual two-week class at the University of Arizona’s James E. Rogers College of Law. Additionally, O’Connor published various essays in such publications as the Denver University Law Review and the Financial Times, and penned the 2013 book “Out of Order: Stories from the History of the Supreme Court.”

In 1952, O’Connor married her husband John Jay O’Connor III, who was a fellow student at Stanford Law School. When O’Connor served on the Court, the couple was active in the Washington, DC social scene. For close to 20 years, her husband had Alzheimer’s; he passed away in 2009. Since then, O’Connor worked to raise awareness of the illness. In 2018, she herself was diagnosed with a form of dementia.

In 2009, O’Connor founded the Sandra Day O’Connor Institute, a non-profit organization committed to championing civic engagement and education. The same year, she launched Our Courts, a website designed to provide interactive civics lessons to teachers and students. Soon, the site evolved into iCivics, which offers various free lesson plans and educational games. Among her other philanthropic endeavors, O’Connor was a founding co-chair of the National Advisory Board at the National Institute for Civil Discourse, which was created at the University of Arizona following the shooting of Gabby Giffords in 2011.

Shania Twain is gearing up to go on tour for her latest album, Queen of Me. She says...