A Welsh-speaking school has been put into special measures for letting children speak too much English.Inspectors found many of the 331 pupils at the...
Read more
Celebrity

What is Mike Tomlin's Net Worth?Mike Tomlin is the current head coach of the Pittsburgh Steelers who has a net worth of $16 million....
Read more
Entertainment

Sharing the stunning photos, Omotola Ekeinde expressed how joyful she is to be turning a new age. Nollywood actress,...
Read more

What is Larry Silverstein’s Net Worth?

Larry Silverstein is an American businessman who has a net worth of $4 billion. Larry Silverstein is most widely known as the developer who purchased The World Trade Center on July 24, 2001, a month and a half before the complex was destroyed in the 9/11 terrorist attacks. Technically, Larry paid $3.2 billion for a 99-year lease on the property just six weeks before. The terms of his lease gave him both the right and the obligation to rebuild in the event the buildings were destroyed. He subsequently re-built the complex as a series of buildings and a memorial on the former site, spending $25 billion in the process. Earlier in his career, he established the real estate firm Silverstein Properties, which has since developed, owned, and managed over 40 million square feet of property. Among the notable properties is 30 Park Place, one of New York’s tallest residential buildings.

Larry Silverstein was born on May 30, 1931 in Brooklyn, New York to a Jewish family. As a kid, he took a liking to classical music and played the piano. Silverstein was educated at the High School of Music and Art, and then at New York University, from which he graduated in 1952. He later attended classes at Brooklyn Law School.

Silverstein entered the world of real estate due to the influence of his father Harry as well as his brother-in-law Bernard Mendik. He went on to found the real estate firm Silverstein Properties in 1957. Based in New York City, the company grew into one of the biggest investors of real estate in the city, developing, owning, and managing over 40 million square feet of property, including commercial and residential spaces. Silverstein’s portfolio includes such major buildings as 30 Park Place, Americas Tower, the Equitable Building, and 120 Wall Street.

Silverstein usually spent his mornings in breakfast meetings atop the World Trade Center North Tower, but was at a medical appointment on the morning of September 11, 2001 when all the buildings in the complex were destroyed or irreparably damaged by the terrorist attacks. An extended dispute with insurers ensued over the amount of coverage for rebuilding some of the structures. Specifically, there was question about whether the attacks counted as one event or two events under the insurance policy. After multiple years of continued disputes, a settlement was reached in 2007 that determined a maximum of $4.55 billion was payable. 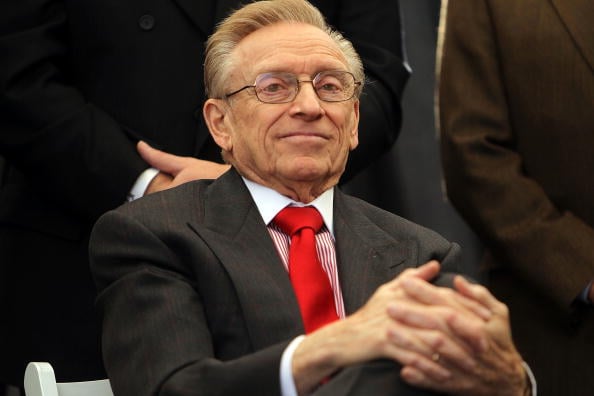 Among his other real estate projects, Silverstein developed a major residential complex that spans the entire block between 41st and 42nd Street and between 11th and 12th Avenue in the Hell’s Kitchen neighborhood of Manhattan. Notable buildings that are part of that area include One River Place and the 60-story Silver Towers. Silverstein also helped develop Manhattan’s new Riverside Center, where the 42-story condominium building One West End opened in 2017.

In 1956, Silverstein married his wife Klara, whom he met while working at a summer camp during college. The couple has three children named Lisa, Roger, and Sharon. Silverstein lives in a $34 million penthouse on the 80th floor of his 30 Park Place tower.

On the philanthropic side of things, Silverstein founded the Real Estate Institute at his alma mater NYU and created a scholarship fund for its medical school. He also served as chairman of the Realty Foundation and United Jewish Appeal, and as a trustee of the Museum of Jewish Heritage. In 2012, Silverstein donated $5 million to his wife’s alma mater, Hunter College, to fund the Klara and Larry Silverstein Student Success Center.