A 'monster' who pretended to be the cousin of boxing champion Tyson Fury in an effort to seduce and rape women has been jailed for...
Read more

What is Jamie Bell’s Net Worth?

Jamie Bell is an English actor who has a net worth of $11 million. Jamie Bell rose to fame in 2000 as the teenage star of the film “Billy Elliot,” for which he won the BAFTA Award for Best Actor. He has appeared in numerous films since then, including “The Chumscrubber,” “King Kong,” “The Adventures of Tintin,” “Rocketman,” and “Film Stars Don’t Die in Liverpool.” Bell has also appeared on television, with notable credits including the series “Turn: Washington’s Spies” and “Shining Girls.”

Jamie Bell was born as Andrew James Matfin Bell on March 14, 1986 in Billingham, England to single mother Eileen. His father John had previously left the family. Bell has an older sister named Kathryn. After accompanying her to ballet lessons, he developed an interest in dance and began taking lessons himself.

In 2000, Bell had his career breakthrough with his very first film role, starring in Stephen Daldry’s coming-of-age film “Billy Elliot.” He played the titular character, a boy in Northern England who angers his widowed working-class father when he decides to take up ballet. For the role, Bell was selected from a field of more than 2,000 boys. “Billy Elliot” was a massive commercial and critical hit, and earned numerous awards and nominations. Bell himself received a SAG Award nomination for Best Actor, and won the BAFTA Award for Best Actor, making him among the youngest-ever recipients of that honor, at the age of 14.

Following his breakthrough with “Billy Elliot,” Bell starred as Private Charlie Shakespeare in the horror war film “Deathwatch” and as disabled servant Smike in the Charles Dickens adaptation “Nicholas Nickleby.” He next starred as a teenager on the run in the psychological thriller “Undertow.” Bell had his most prolific year yet in 2005, starring in three films. First, he played gun-toting pacifist Dick Dandelion in Thomas Vinterberg’s crime film “Dear Wendy.” He subsequently played restless suburban California teen Dean Stifle in the dramedy “The Chumscrubber.” Closing out the year, Bell appeared as shipmate Jimmy in Peter Jackson’s “King Kong.” In 2006, he was part of the ensemble cast of Clint Eastwood’s WWII film “Flags of Our Fathers,” in which he portrayed Ralph “Iggy” Ignatowski of the US Marine Corps. The following year, Bell starred as the titular teenage loner in the drama “Hallam Foe,” based on the Peter Jinks novel. He went on to appear in two films in 2008, the science-fiction action film “Jumper” and the WWII film “Defiance,” in which he portrayed Asael Bielski.

Bell had a major year in 2011, starring in four films: the epic historical drama “The Eagle,” Cary Fukunaga’s adaptation of “Jane Eyre,” the horror thriller “Retreat,” and Steven Spielberg’s animated action adventure film “The Adventures of Tintin,” based on the Hergé series of comics. Bell starred as Tintin using motion-capture for his performance. Over the subsequent years, he had notable roles in “Man on a Ledge,” “Snowpiercer,” “Filth,” and “Nymphomaniac.” Bell returned to motion-capture acting in 2015 to play the Thing in Josh Trank’s flop superhero film “Fantastic Four.” He earned much better reviews for his starring role opposite Annette Bening in the biographical romance “Film Stars Don’t Die in Liverpool.” Among his other notable roles, Bell portrayed former skinhead Bryon Widner in “Skin” and Elton John’s songwriting partner Bernie Taupin in “Rocketman.” 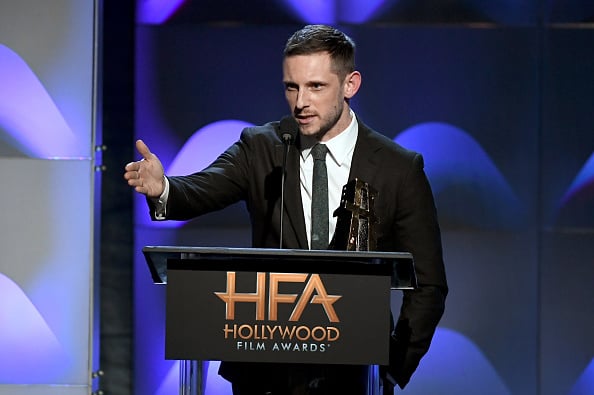 In 2000, the same year he debuted on the big screen in “Billy Elliot,” Bell appeared in an episode of the ITV legal drama “Close and True.” He didn’t return to television until 2014 when he landed a main role on the AMC period drama series “Turn: Washington’s Spies,” based on the book by Alexander Rose about the history of the Culper Spy Ring during the American Revolutionary War. Bell portrayed Abraham Woodhull, a leading member of the Ring. His costars included Seth Numrich, Daniel Henshall, Heather Lind, and Meegan Warner. “Turn: Washington’s Spies” ran for four seasons through 2017.

Bell began another main role in 2022 on the Apple TV+ thriller series “Shining Girls,” based on the Lauren Beukes novel. He plays Harper Curtis, a serial killer responsible for attacking the protagonist Kirby Mazrachi, played by Elisabeth Moss. Other main cast members include Wagner Moura, Phillipa Soo, and Chris Chalk.

In 2005, Bell dated actress Evan Rachel Wood, whom he met at the Sundance Film Festival. That year, they starred opposite each other in the music video for Green Day’s song “Wake Me Up When September Ends.” Bell and Wood later rekindled their romance in 2011, and got married in late 2012. They had a son before divorcing in 2014. The next year, Bell began a relationship with his “Fantastic Four” costar Kate Mara, whom he eventually married in 2017. The couple has a daughter together.

We all assumed that the Chinese Spy Balloon was, in fact, a spy balloon. But what if it weren’t? What...
Entertainment